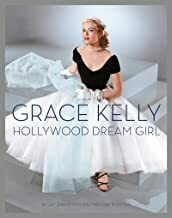 No movie star of the 1950s was more beautiful, sophisticated, or glamorous than Grace Kelly. The epitome of elegance, the patrician young blonde from Philadelphia conquered Hollywood and won an Academy Award for Best Actress in just six years, then married a prince in a storybook royal wedding. Today, more than thirty years after her death, Grace Kelly remains an inspiring fashion icon.

Filled with a dazzling array of photographs, many from original negatives, Grace Kelly showcases the legend’s brief yet significant acting career as never before. Blending pictures and memorabilia, this breathtaking compendium traces every step of her artistic journey, including her early television appearances, her breakout role opposite Gary Cooper in High Noon (1952), her exceptional collaboration with Alfred Hitchcock on her most indelible films—Dial M for Murder with Ray Milland (1954), Rear Window with Jimmy Stewart (1954), and To Catch a Thief with Cary Grant (1955)—and her performance in the musical High Society (1956) alongside Frank Sinatra and Bing Crosby.