The Hollywood Film Industry has done its part in showing patriotism and serving our country in times of crises, from visiting the troops to selling bonds to serving overseas to producing gung-ho films. Famous Players-Lasky went further, creating its own Home Guard in 1917, outshining all other movie studios.

Paramount sold more bonds than every other film production company in 1917, with $75,000 in Liberty Loan bond sales collected from employees and a $100,000 donation from the studio. Two weeks after President Woodrow Wilson declared war, and just a few days before the first draft, passionate director-general Cecil B. DeMille jumped into action, establishing the Lasky Home Guard with himself as commander.

Composed of studio employees unable to serve due to age or because they served as the family’s main financial support, the Home Guard possessed such members as actors Tom Forman, James Neill, Jack Holt, Tully Marshall, Hobart Bosworth, Guy Oliver, Lucien Littlefield, Kenneth Harlan, Wallace Reid, and directors William De Mille and Henry Hathaway. Veteran actor Hobart Bosworth took part in the unit, telling the San Diego Union, “I am a private in the rear rank, but I try to do my duty in that sphere of life in which it has pleased God to call me.” Older actor Theodore Roberts would even occasionally muster with the group.

Cecil B. DeMille assigned Lieutenant Henry Woodward, who formerly served with troops stationed in the Philippines, to provide discipline and proper training to the studio unit. Recognized as the 51st Company, California Reserves, the group would “guard property and maintain order in the event of the National Guard being called out of the State… .” Young members would be so thoroughly trained that they would advance rapidly if actually called to serve.

Little American Mary Pickford even presented the group with a silk stars and stripes not long after the organization formed, participating in the donation ceremony at the Lasky Ranch with Reid, color guard for the unit. This ceremony involved drill, review, flag presentation, and skirmish. Pickford later donated an ambulance.

Woodward, chief drill master, held non-commissioned officers’ drill every night of the week. Officers attended a special school three nights a week along with drilling by the entire group two nights a week and on Sundays at the Lasky Ranch in the San Fernando Valley. The group was so organized that they could be mobilized and armed in one hour after the alarm sounded per reports.

The organization, which Motion Picture News called “the crack military organization of the West Coast,” was sworn into service for the State of California between filming scenes for the Cecil B. DeMille-directed film “The Woman God Forgot.” DeMille was the first to add his name to the roll, followed by his lieutenants Woodward and James Neill, and then by director of photography Alvin Wyckoff, Fred Kley, production business manager and publicity man Kenneth McGaffoy.

DeMille kept his men fit and ready for service. Reports indicated they held competitive drills with other guard units nearby and they participated in patriotic meetings and gatherings around the Los Angeles area. They sometimes held performed military drills at these public events. They also took part in Liberty Loan rallies around Hollywood and Los Angeles.

Just a few weeks later, on April 30, a fire occurred in a film storage room at the Lasky Studio. Newspapers reported that “thousands of rounds of blank ammunition for machine guns, stored in the stock room, began to explode in quick and menacing succession.” The fire started from sparks of wire on a cutting machine, causing some film to be lost, including color positive scenes for DeMille’s film “New Wives For Old.”

During a massive patriotic rally at Clune’s Auditorium downtown Los Angeles on May 26 for the organizing of the Motion Picture War Relief Association, at which “practically every motion picture star and director was present,” the Lasky Home Guard performed a drill as part of the program. Other acts included tableaus, the participation of the Junior Red Cross, and military bands.

For Memorial Day that year, the Home Guard and its band joined the Hollywood High School cadets and war service girls. and Hollywood’s officers’ training school, over 300 strong, to march to Hollywood Cemetery to decorate the graves of Civil and Spanish-American War veterans with flowers. They would later participate in a Los Angeles Chamber of Commerce patriotic rally at Exposition Park near the end of June.

Governor Stephens of California addressed the Home Guard Wednesday evening, July 24, 1918 at the Studio, praising them for their service to state and country. Motion Picture News recorded his words. “As Governor of the State and Commander-in-Chief of the military forces of the State, I wish to express my appreciation and to say that the State and your Governor stand behind you and will do everything in their power to help you. I know that every man of you will fight if the necessity arises, or even the opportunity, for I have heard many fine things of this organization from various sources.”

In August, newspapers reported that the Lasky Studio leased a large tract of land near the studio on which the Lasky Home Guard could conduct its drills. Just two weeks later the enlarged Lasky Guard participated in a Motion Picture Rally and parade for the war effort led by Douglas Fairbanks. Major DeMille led his two companies marching in three platoons each followed by their machine gun units with actual weapons, mounted on carriages, ambulance, and signal unit.

While most of the Lasky Home Guard merely served in Hollywood, some younger members did serve overseas. Patriotic and loyal, Cecil B. DeMille and his crack military unit brought recognition and distinction to the Lasky Film Studio in their service to their country. 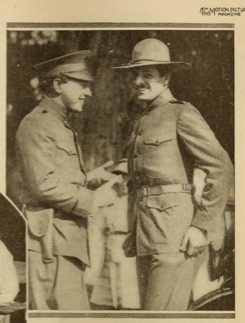 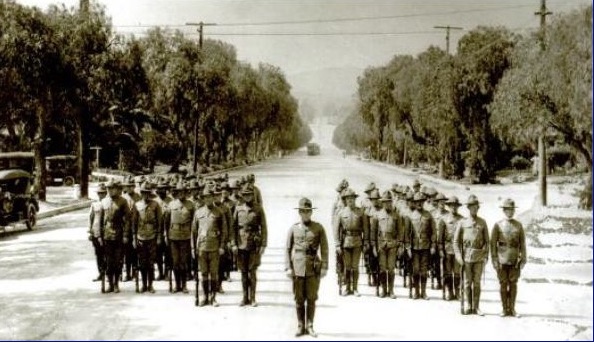